“Sheepshead should arrive in full force with bigger ones being caught for sport and harvest.” Says Captain Terry

Fishing this last week was fair to good. Unfortunately, the new moon phase provided the higher and stronger currents during night time hours when most of us were off the water. Furthermore, It appears that the weekend and the start of the week will bring cooler weather, making the fish a little lethargic. None-the-less, do not be discouraged, as the good news is; Sheepshead should arrive in full force with bigger ones being caught for sport and harvest. The best baits for Sheepshead, are Fiddler crabs and shrimp pieces. The Seatrout and Mangrove Snapper bite should be good on small shrimps.

Some Spanish Mackerel are being caught as they continue to migrate through the area. Hopefully, this week’s cool front from up north will move them south in bigger numbers and sizes.

Live pilchards are being netted around the Sanibel Causeway in fairly good numbers on either the early morning incoming or outgoing tides. This is the best live presentation available for Snook. Jack Crevalle are everywhere and love to eat them as well. 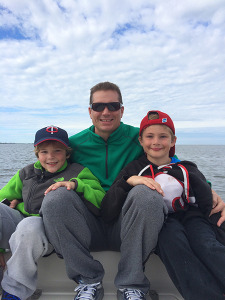 Pictured here is Aaron, Gavin and Eli Hoffman of Lakeville, Minnesota on their annual fishing trip with Captain Terry. Aaron shows off his first Snook (22″) caught on a pilchard while free-ling. Gavin (11 yrs) is holding just one of his many Seatrout he caught that day. His brother Eli (9 yrs), is shown with his Seatrout as well as a nice Gag Grouper he caught. I enjoy taking these junior anglers out as they are two of the better fishermen that I have the pleasure to fish with! Nice job Gavin and Eli! Practice casting and you will get your Snook next year. 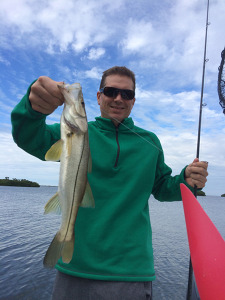 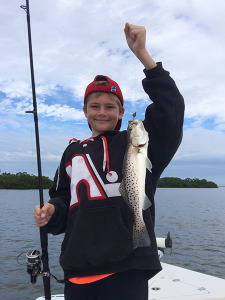 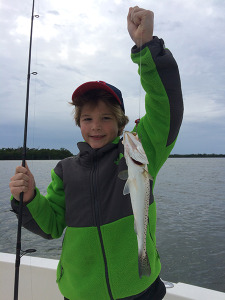 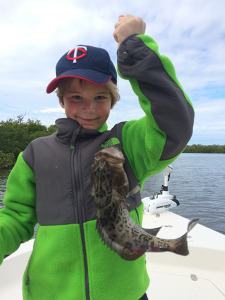 This is Captain Terry Fisher wishing everyone tight lines. If I may be of assistance for a charter on your vessel or mine, call me at 239-357-6829. More articles and charter information will be on my website at www.fishfacecharters.com including charter rates on my vessel or your vessel. Email me or my 1st Mate Vicki at fishfacecharters@yahoo.com with any requests or questions.

“The Spanish Mackerel and Pompano bites are picking up.” Says Captain Terry

(Ft. Myers Beach to Charlotte Harbor) Last week’s fishing continued to produce some decent back-country fishing for all of my clients. Some bait fish remained in the area allowing me to throw the cast net for baits to feed the Snook and Redfish. Pictured here is Mr. Blaine Duncan of Saskatoon, SK. (Canada) holding his first Redfish catch here in SW Florida. 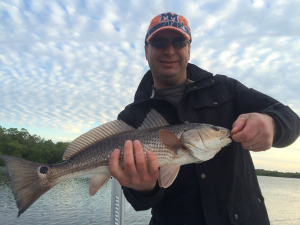 The Seatrout bite is good, but I am still looking for some bigger ones which become more plentiful on the flats during the winter months. Mr. David Whitaker of Tennessee is pictured holding a nice Seatrout caught under a cork with live shrimp while here at a corporate sponsored ‘outing’ with the Vantacore group, based in Philadelphia. 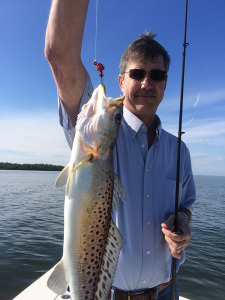 The Spanish Mackerel and Pompano bites are picking up. Mr. Barry Fink of Pittsburgh, PA is pictured holding his first Spanish Mackerel. His friend Jason Jumonville, of Baton Rouge, LA., is holding a large Pompano that he had the pleasure to fight and land on light tackle. Both Barry and Jason were with the Vantacore group as well. 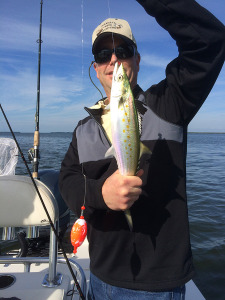 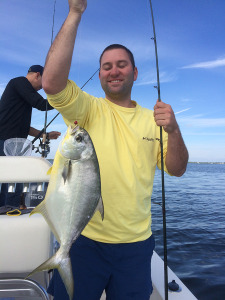 Sheepshead, Flounder and Mangrove Snappers will round out the balance of the back-country species. Recent, cooler water temps will attract the bigger Sheepshead and small pieces of shrimps or fiddler crabs will be the key to catching these fighting, tasty morsels, sometimes referred to as ‘poor man(s) lobster’.

Offshore, the King Mackerel bite is on as well as good bottom fishing for grouper and Snappers. Grouper should begin coming into the back- country pot holes, since the water temperature is rapidly dropping due to the early cold fronts this year.

Warmer forecasts for the coming week should provide lots of opportunity to get on the water and fish. Fishing should remain good for the species mentioned above. Until the next report this is Captain Terry Fisher of Fish Face Charters wishing everyone ‘tight lines’! Charter information may be obtained on line at www.fishfacecharters.com or by calling or emailing me directly at 239-357-6829 or fishfacecharters@yahoo.com. Those wanting boating and/or fishing instructions, feel free to inquire as to ‘special’ hourly rates on your vessel. This will help you to have more relaxed and confidence when boating or fishing.