Fishing Marathon is about as good as it gets when the winds are cooperating. My last article made readers aware of my plans to spend two weeks in Marathon at a house located on Key Colony Beach. Unfortunately, the hurricanes that skirted the gulf side, the mid Atlantic Seaboard, as well as the southern tip of the Florida Straits, dampened my ability to fish no more than four (4) days. Regardless, the four (4) days of fishing still made it all worthwhile. I had several clients from the west coast (SW Florida) as well as other parts of the country awaiting my call to join me but I was only able to have one client/friend, Mr. Justin Dillion, from N. Carolina fly into Key West. I always apprise clients/friends that the weather is very unpredictable and one needs flexibility when planning a trip to the east coast for offshore fishing for Pelagic species.

Another client/friend, Mr. Denny Pelligrino from New Jersey and Cape Coral was in a ‘holding’ pattern and was prevented from coming down to Marathon due to the high winds. Denny actually flew into his home in Cape Coral from New Jersey, with the intention of driving down to join me the last five (5) days of the trip, but cancelled due to the inclement weather. Sorry Denny, we will do again sooner than later.

Other clients/friends trailered their boats down during my last week in Marathon. Ron Defreitas and his lovely wife, Lucinda, along with their friends, made the effort to join the fishing party during the last full week of August. Unfortunately, they were only able to get one day of fishing in due to the 15-20 mph winds and stronger gusts during the week. They did have good success catching Dolphin (Mahi Mahi) during their one day on the water and that day’s catch sufficed to feed their party of 5 all week. Needless to say, there was a lot of beer and food consumed during the rest of their stay.

As mentioned above, Justin Dillon flew in two days before the Defreitas family arrived at Sombrero Key (only a few miles south of where I was lodging). I picked him up at the Key West airport for a short drive back to Marathon. In the meantime, I had made arrangements with my son-in-law, Paul Smith whom recently moved from Texas to Cape Coral, Florida. Paul is an avid outdoorsman that loves to fish and hunt. I relished the opportunity to accomodate him, so as to assist me with the charter for Justin, as anyone who has ever trolled and caught Dolphin, Sailfish or Tuna understands the benefits of three or four people on board.

In order to catch one’s quota of Dolphin, a system is required whereby they can be hooked and boated in as orderly fashion as possible, to maximize catching a number of fish once a school is located. I prefer to troll rigged Ballyhoo and artificial presentations at a slow speed along weed lines and patches and where I find birds diving. Once a fish or two hits the rig, I bring the lines in or have the 1st Mate, in this case Paul Smith, and/or the client (Justin Dillon) clear the transom while leaving one Dolphin in the water in an effort to keep the ‘school’ together. Once the trolling lines are in and out of the way, I stop the boat and periodically throw chum in the water.  That’s when my ‘system’ comes into play. The designated fishermen or fisherwomen get on the pre-rigged fishing rods (with cut Ballyhoo, squid or Pilchards) that are stored in the rod holders and start pitching to the school of fish around the boat. I have a large cooler loaded with ice in the bow of the boat with the lid open. I grab the leader as the anglers present the fish to me and place them immediately in the cooler and close the lid. The anglers pick up another pre-rigged, baited rod and cast to the remaining school of fish. Once the fish in the cooler quits flopping around, I remove the hook and reset the rig for re-casting. Always leave one fish in the water. It is quite a busy event and if not done correctly, it becomes a blood bath with tangled lines all over the vessel. Every angler is allowed ten 10 Dolphin fish per day with a maximum per vessel, so a system is required to be able to maximize the catch. Pictured above is Justin Dillon with some of those fish he took back home to N. Carolina to enjoy.

Another day, Paul Smith and I fished the reefs for Yellowtail Snapper and other species. He is pictured with a couple of his catches that day before he returned back to Cape Coral. Paul was the perfect mate and fishing pal as he is knowledgeable and made life much easier on me during the Atlantic fishing adventures.

Back home here in SW Florida, inshore fishing has been spotty in areas around Boca Grande Pass, due to Red Tide. I have found most of my success on the Burnt Store Bar and in Matlacha Pass. I look for the fishing to improve as the weather cools. I had an opportunity to fish with Paul Smith upon my return from Marathon. He is pictured with a Snook he caught deep in the backwaters of Pine Island Sound. 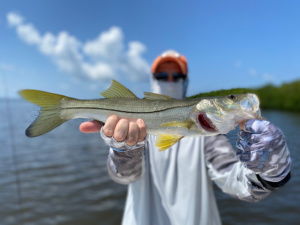 This is Captain Terry Fisher of Fish Face Charters, LLC wishing everyone tight lines. I am available as Captain for Hire (by the hour), inshore or offshore on your vessel for safety, navigational, fishing techniques and fishing locations that ensure every trip is a success. Call me direct at 239-357-6829 or email me at fishfacecharters@yahoo.com. Check out my website at www.fishfacecharters.com for more information.