Spend a little time in Southwest Florida and you’ll come face to face with all kinds of wildlife, but being out on the water can get you even closer to Florida’s first inhabitants! From coral reefs to canals, wetlands to mangroves, and everything else in between, the Sunshine State has some of the most diverse ecosystems in the country. If you stop and enjoy the silence, you may be able to see these fan favorites while out on our waterways. 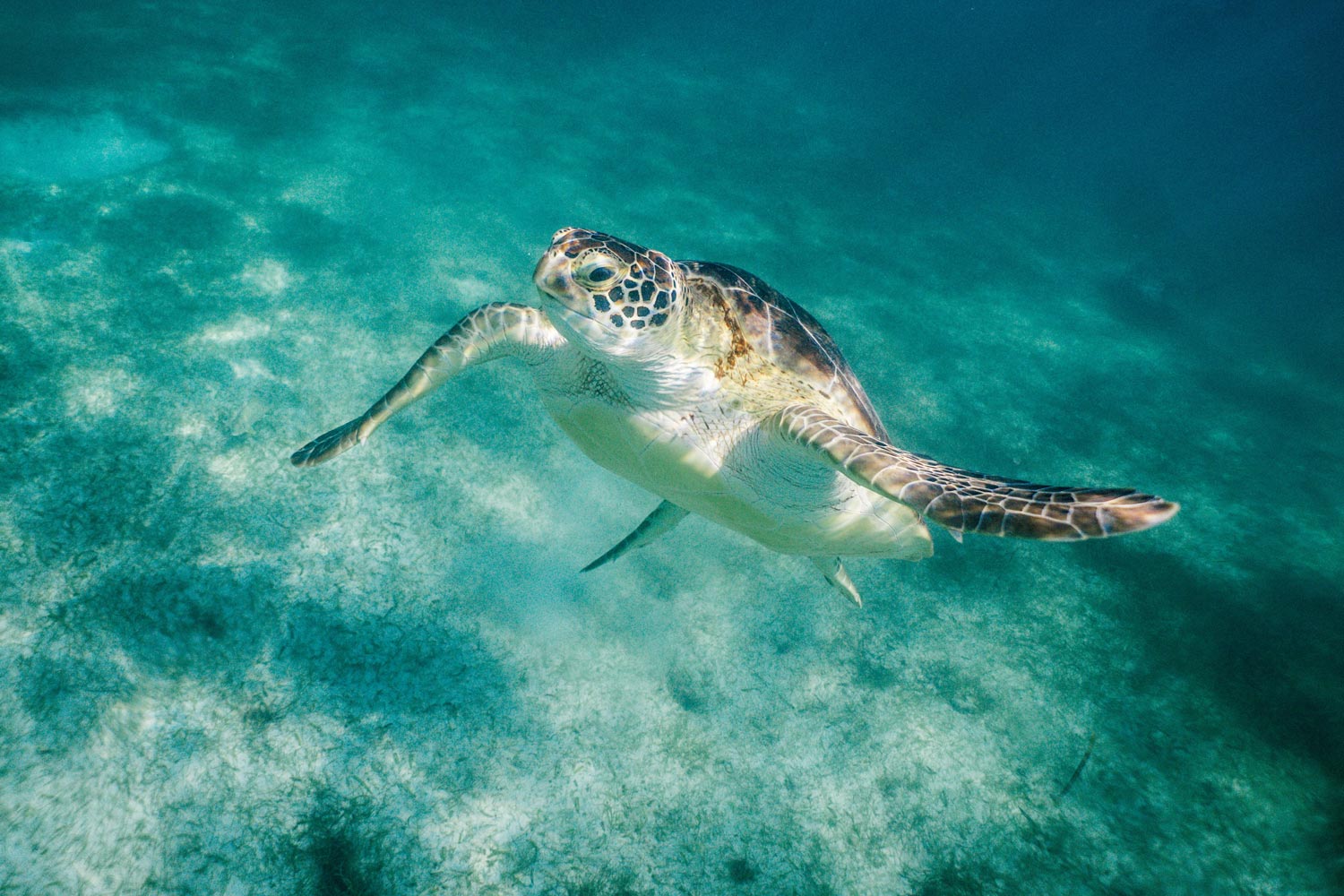 Being surrounded by water plus hundreds of thousands of rivers and inland lakes makes Florida the perfect home for many aquatic species.

These aquatic herbivores, also called “sea cows”, spend their days grazing in shallow water. From the very tip of their whiskered snouts to the end of their tails, manatee average 9-10 feet and weigh about 1,000 pounds, however, some have been recorded at three times the size! In addition to these state parks and rivers, you may also find manatees swimming alone or in a pair in warmer waters November-March. These slow, gentle creatures were endangered up until early 2017 when they were reclassified as threatened under the Endangered Species Act. Boaters share Southwest Florida waters with these beautiful creatures and are encouraged to pay close attention to manatee zones. Be sure to favor the middle of the channels and to keep a sharp eye while cruising through these areas.

Similar to manatees, these clever creatures only come to the surface to breathe. Did you know the clicks and squeal like noises that dolphins make actually come from their blowhole, not their big toothy smiles? Wild dolphin can be found playing in the waves along Florida’s coastline and throughout the back bays. The Calusa Blueway, a 190-mile paddling trail, is known for its dolphin sightings all the way from Pine Island Sound down to Estero Bay throughout the Caloosahatchee River. Dolphin watching is usually most successful in the early morning when marine animals feed. Bottlenose Dolphin may not be a Floridian angler’s best friend (fish thieves!) but to just about everyone else, they may be the highlight of your trip!

The smalltooth sawfish have very distinct features and actually resemble a 17-foot hedge trimmer, if hedge trimmers actually came that big! They swim similarly to sharks but the gill slits under their bodies actually make them close relatives of stingrays. Sightings are incredibly rare, but Lee County is designated as a critical habitat for this endangered species. Scientists and researchers know very little about them so if you happen upon one while out on the water, email sawfish@myfwc.com with the date and time of encounter, location, estimated length, water depth, and any other relevant details.

The loggerhead is the most common sea turtle in Florida. These massive turtles are hard to miss, weighing at an average of 275 pounds with about a 3-foot-long shell. Their diets usually consist of clams, crabs and other small shell animals. Loggerheads are rather slow swimmers but have fantastic endurance. One tracked from off of the coast of Melbourne Beach was found just 11 days later near Cuba!

Florida and alligators go together like Jimmy Buffet and margaritas! Alligators are found in almost all parts of Florida but they’re actually classified as threatened. Alligators can reach up to almost 15 feet in length and over 1,000 pounds. They certainly aren’t picky eaters and will feed on whatever is available, like small mammals, birds, turtles and fish. If you’re out in the back bay, chances are high you’ll see their nostrils poking up through the fresh and brackish water.

One of our many fishing charter captains will be able to hook you up with all the details on the many fish you can find in SWFL! If you’re lucky, you’ll come across a shark or two as well.

Birds of the Feather

In addition to a diverse population of animals below the water’s surface, Florida is home to over 500 species of birds. Just like humans, there are birds who visit just for the winter and others who call Florida their home year-round. The species of birds vary just as much as our “snowbirds” friends. Here are a few of our favorites:

Chances are if you see a blur of black, tan and white diving from the sky into the water, it’s an anhinga. These “snake birds” are actually minimally water resistant to help them dive deeper into the water to spear fish with their sharp beaks. When they’re not fishing they can be found sunning themselves in the tops of the mangroves.

On the opposite end of the color spectrum is the rosette spoonbill. Not only are their pale pink and red feathers completely opposite from the anhinga, their methods of finding food are, too. Their spoon shaped bills have very sensitive nerve endings which make it easier to find small fish, crabs, and water insects in shallow waters.

With its long neck and legs and striking features, the great blue heron is the supermodel of birds! True to their name, they are blue-ish grey with a black crown and head plumes. Their legs and bill are a contrasting orange color, making them easy to point out. Similar to the anhinga, the great blue heron uses its sharp long, daggerlike bill to spear its fish, except from the safety of shallow wetland waters.

It may be hard to believe that a pelican or seagull isn’t the Floridian state bird, but in fact this species holds the title! If you hear a song-like chirp, even in the middle of the night, there is most likely a mockingbird closeby. A male mockingbird can learn around 200 songs in its lifetime. While they do commonly spend time in other parts of the country, they prefer warm weather and can be found in Florida all year long.

Respect Nature on Your Boating Adventure

Most remember the first time they see an alligator or catch their first massive redfish in the backbay. Even after thousands of these Floridian experiences, it doesn’t get old for year-round residents either! With constant expansion and construction, it can be easy to forget our neighborhoods were home to these animals first. Remember that it is illegal to harass, feed, chase or touch many wild animals. So while you are spending the day out on the boat, keep in mind that the beauty of Florida will remain for centuries to come if we all do our part by respecting nature.