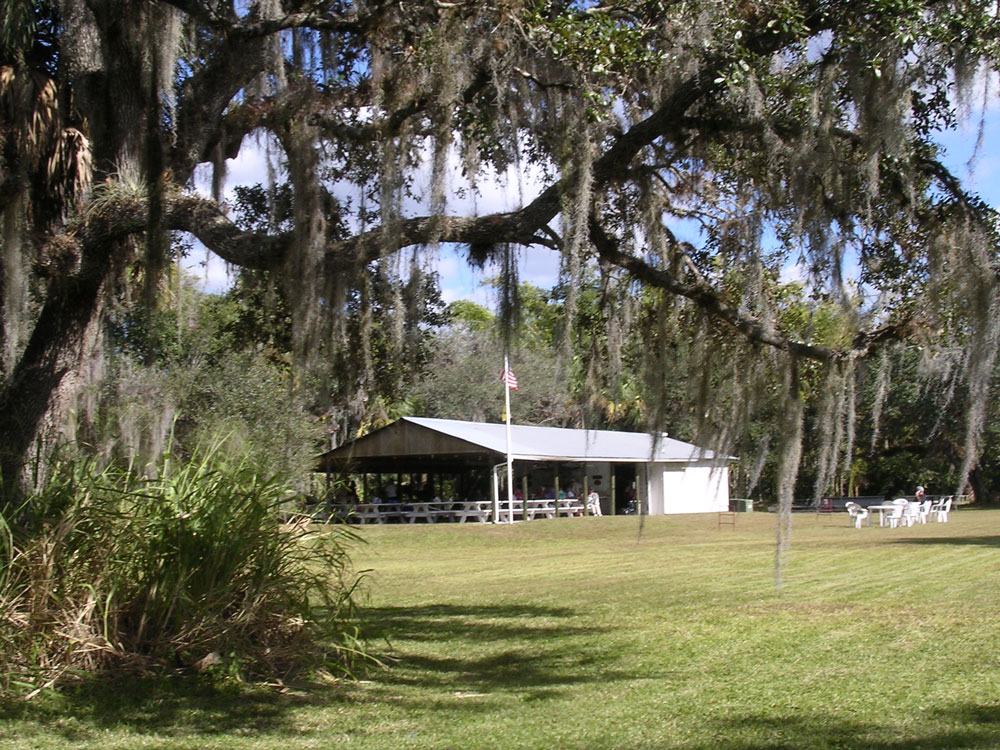 The Cape Coral Cruise Club, founded in 1963, is unique among S.W. Florida boat clubs in that it owns a portion of a private spoil island on the Caloosahatchee River east of the Franklin Lock near Alva. Over the years a covered pavilion has been built where the members enjoy elaborate monthly picnics, bocce, horseshoes and other relaxing activities.

A major advantage for members is that the Island has ample dockage for member’s boats. Over the years, four docks have been installed on an inside oxbow off the ICW having both 30amp and 50amp electric service. This allows for as many as 16 member boats, up to 45′ in length, to be docked for the weekend at minimal cost.  Ferry service across the ICW aboard the club’s 30′ covered pontoon boat, skippered by a USCG licensed captain, is provided for members & guests who do not come to the monthly picnic by boat.

Because the Club is a cruising organization, in addition to the Island picnics, members can participate in monthly cruises to local destinations.  Spring 2017 cruises included: 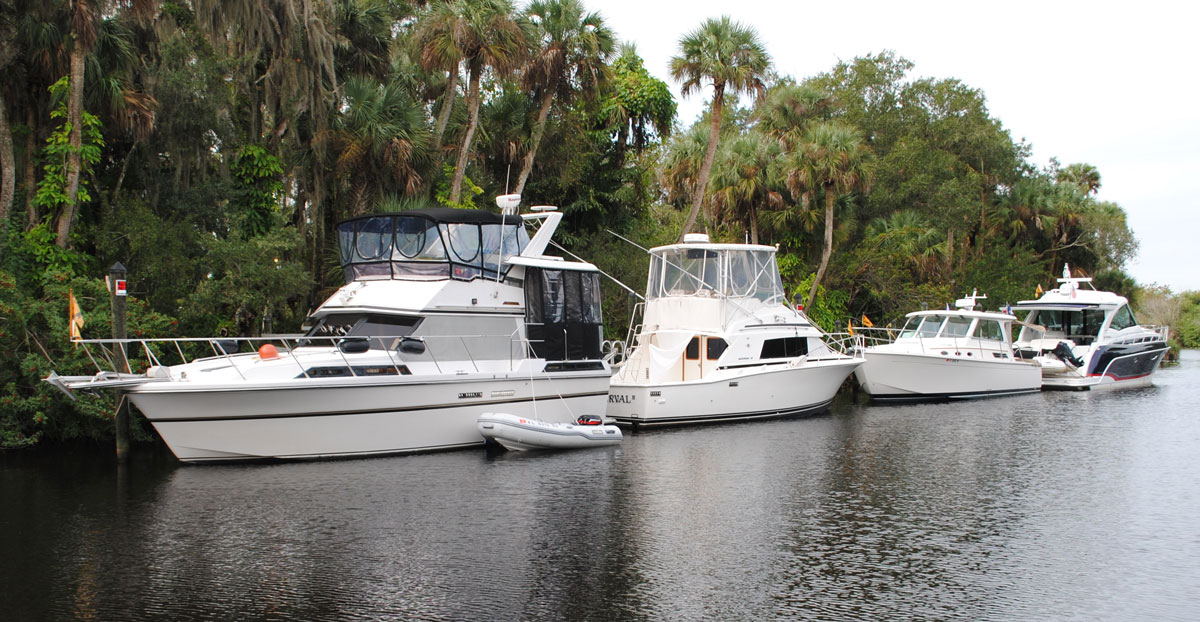 January destination:  For the last few years Legacy Harbour in downtown Ft. Myers has become one of the most popular nearby Club cruise destinations. With a beautiful pool and outstanding docking facilities this cruise always has a wait list. Cruise leaders have been known to plan very interesting and different daytime activities. This year was no exception. Following a short break after breakfast on day two, everyone reassembled at the Legacy Harbour chickee hut to begin a scavenger hunt.

There were three outstanding prizes to be awarded, consequently, fierce competition ensued as the boaters returned to their respective vessels in search of the listed items.  Would you allow two mismatched oven mitts as “work gloves”?  How about a jar of “teak oil” that looked suspiciously like vegetable oil?  And did the same miniature sewing kit get passed around with the teensy baby pin in it?  Anyway, a lot of fun was had.  Moonlighter, Hardee II, and Happy Ours triumphed as the successful winners. Some selected to remain at the marina for lunch, yet others sampled great fare at restaurants on First St. in Ft. Myers.

and the Cape Coral Cruise Club was welcomed as the first group to use the new facilities. Since then Pink Shell has repeatedly been on our cruise destination list. The resort has several pools, excellent beach facilities and outstanding restaurants. This cruise normally has at least a dozen or more member boats in attendance. The highlight of this cruise was the cruise leader’s “The Awful Waffle Game”.

As club members watched, 25 frozen waffles were stacked on an empty table in the center of the room. Everyone was divided into teams of four. The object of the game is simple. Just spread them out into 5 rows of 5 each, making sure that all waffle lines are perfectly aligned both horizontally and vertically as demonstrated. When completed just pick them up and dump them in this trash can across the room.  Each group was told it would be timed and the fastest team would win. Just before the first team started, the leader advised, WAIT… there’s a catch!  ELBOWS…ONLY!”  That’s correct – the waffles could only be moved with players’ elbows. And the fun began! It was a wild and funny sight watching these seasoned boaters trying to move and twist waffles with their elbows.  Each team worked feverishly to beat the time of the previous team. When it was over, the winning team prevailed with a record time of 1 minute and 53 seconds. Just another innovative and different cruise activity.

March destination: For the past few years the March cruise has been one that is longer than most, sometimes lasting as long as two weeks. The final destination this year was Marina Jack’s Marina in Sarasota. After breakfast on day two, 16 members headed to the Marie Selby Botanical Gardens which boasts 10 acres of beautiful tree and plant specimens, as well as an impressive array of Bonsai trees ranging in age from 7 to 20 years of horticultural “in-training,” where specimens are trimmed and modeled for future display. The highlight of the Selby Gardens is a huge climate-controlled tropical greenhouse arrayed with incredibly beautiful orchids in a multitude of varieties and colors, displayed in breathtaking settings. A pre-paid catered lunch followed the tour in the outdoor patio underneath a large banyon tree.

After this outstanding afternoon activity the group returned to the marina for docktails, our group fanned out through downtown Sarasota seeking interesting and a variety of delicious dinner options. 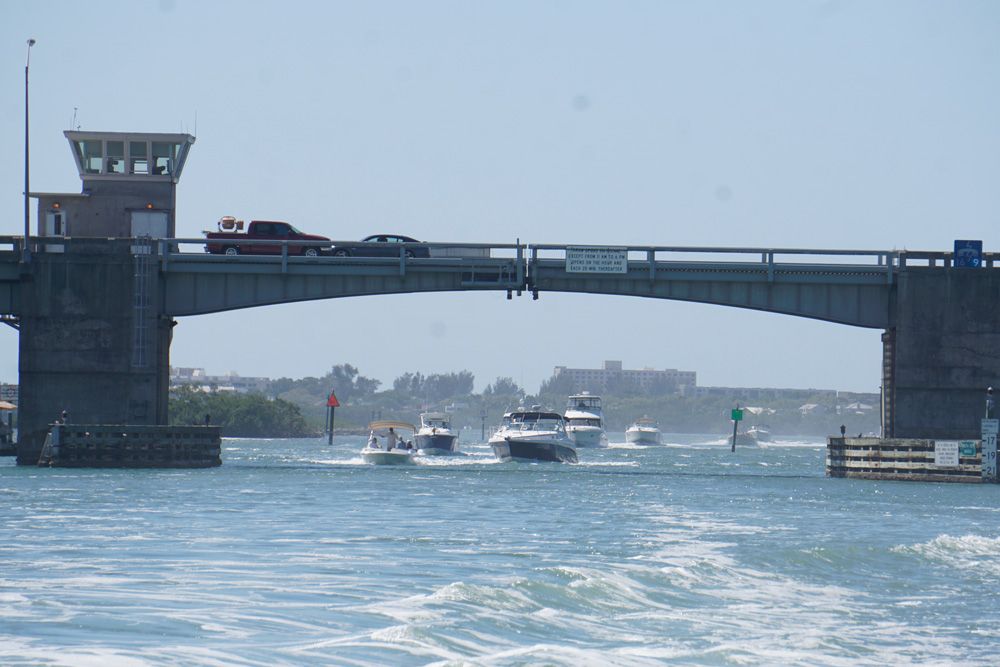 April destination: Once again the Cape Coral Cruise Club returned to Fisherman’s Village Marina in Punta Gorda. We had a final count of seven boats who found their way to Fisherman’s Village via the Gulf Intracoastal Waterway for our April 18-21, 2017, cruise. On Day Two, 16 CCCC members came by car to join the boaters for a delightful cruise up the Peace River aboard the Lady Charlotte, a nearly new passenger/cruise vessel. Cruisers were treated to sightings of playful dolphin, beautiful Roseate Spoonbills at an island rookery, and a couple of good-sized gators.  The tour was narrated by our own Captain Doug Rhees who is well versed on Florida wildlife! A few more carloads of members drove up from Cape Coral later to join us for dinner at The Village Fish Market in Center Court of Fisherman’s Village. We had a hungry crowd of 48 diners! What a delightful turnout.

These brief snippets of cruise activities members enjoy and look forward to is one of the many reasons the Cape Coral Cruise Club continues to grow and attract folks not only interested in boating in South West Florida, but having a fun time doing it.

The Cape Coral Cruise Club is open to new members who own a boat with overnight accommodations and reside in the Cape Coral / Ft. Myers area. For membership information please contact Phil Kryger at 239-541-0236. Read additional Club information on our website, www.c-c-c-c.org  Like us on Facebook.