Andros – April 6th to 16th. Dealing with the loss of my father and (two) one week vacations in one short month was a new one for me. My Dad was a sailor and outdoorsman and I have tried to follow in those footsteps as well. But I seldom take that much time off from work since I am the top billing guy in a marine engineering consulting firm.  With some trepidation I accepted the invite from Rocky the Flying Squirrel to go explore the west side of Andros Island with Diamond Dave and the lovely Miss Em.  I would be returning home and, in less than a week, would be leaving again for Costa Rica. But I couldn’t NOT go, citing the old adage “No one was ever in their death bed saying they wished they spent more time in the office”.  My Dad had died in the end of March and his passing was additional impetus for me to live my life to the fullest extent possible.  He would accompany me on this trip, in both ashes, and spirit.

It is a good team, with The Flying Squirrel a wiggy, lovable one.  Em is a lady capable of holding her own with the guys. Diamond Dave is the consummate Bahama’s boater.  Dave and The Squirrel are partners in the boat with two others.  Fortunately that means the boat get’s used a lot, always better than one that sits around. A Bahama’s trip with this group is always good company, full of adventure, work, and wonder.  But it is always a challenge in escaping the commitments of the work world.

This trip would be unusual in that we were going to be exploring the west side of Andros Island.  This area is very remote and mostly viewed by the Squirrel from a couple of thousand feet in altitude while making his way from Florida to the islands and back.  All those little dark patches in the water were something!  With the wonder of Google maps, GPS, and a little luck we would find a sunken treasure ship or maybe at least a fish or two.

Three days before leaving, Robin my business partner, and I blasted down to Key West to check on the progress of one of our construction projects, Tarpon Pier replacement.  She did the driving and I worked on the laptop, writing reports, and basically doing as much as I could to get caught up before I left. It also gave me time to think about my responsibilities for two meals on the trip.  I knew I could whip up a decent spaghetti sauce, hey, who can’t, but the second meal was a challenge.  Shell, my sweet wife, offered some solutions, the best one being sausage with onions and peppers.  But I was concerned about bringing produce into the country, not wanting to start out the vacation in a Bahamian brig.

I worked my lists and resolved myself to cook spaghetti sauce on Thursday night, coming back from the Keys run.  Travelling such a distance is tiring, even if I am not doing the driving. Robin and I got back into town about 6:00, time enough to get to Publix and secure the proper supplies.  Sometimes it is easier to make a decision about something when you just relax and let the ideas flow.  I bought into Shell’s idea of the sausages, and bought a big pack of Bratwurst.  I already had Mom teed up to prepare her world famous potato salad, so I figure between the spaghetti sauce and bratwust/potato salad I would be covered for the trip.

Cooked, delicious, and cooling on the stove was my best pot of spaghetti, probably because I hadn’t made it in so long so I thought it was pretty good.  Shell baked the brats on Friday and Mom delivered on the potato salad Friday night.  Things were working out.

I was forsaking my Board meeting Friday night for an evening out with Shell.  That was okay since she gave me the Bahama’s pass for a week.  I know we had a Costa Rica vacation following the Bahama’s adventure so my husband credits were good, but never the less we had a lovely evening out. She was happy with dinner and the week ahead was looking good.

Saturday – The lists worked well, crossing off items, rethinking others, and adding those last minute items I seem to always forget.  I was packing the truck for the run to Naples, grabbing last minute items like batteries out of the shop as I got ready.  I made Rocky’s office at 8:00, on time, and sat in Em’s cubicle marveling at her cartoon collections as she wrapped up her business.  She has a marvelously dry sense of humor and I can always count on her for an occasional  email worthy of archiving.  The boys had yet to arrive.

We made it to the airport and began the process of loading all the “stuff” we had.  Wow, so much gear and they already had preloaded the boat over the past month. I stepped in and exercised my “stowing prowess”, getting it all packed into the back of the plane.  With no room to spare we were wheels up for New Providence. 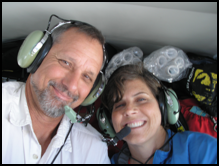 Jammed to the roof of the plane with our load of gear.

It was an effortless flight, The Flying Squirrel doing his usual stellar job of piloting with Dave by his side, and shortly we were unpacking, then packing again into a taxi at Odyseey, the private terminal in Nassau.  Customs asked a question about our packages but we were innocuous enough that they didn’t check anything.  I could have brought the produce, hell, Dave had a bag full but it was easier bringing a cooler with the spaghetti, brats, and potato salad chilled.  Plus we had a bunch of Coors Light, Dave’s flavor of choice.

We got it all into the taxi and headed off to the marina at Old Fort Bay on Lyford Cay, stopping at the new Whole Foods store for some last minute foodstuffs and a case of Gold Kalik, my favorite beer.  In spite of it now being available at Publix, it was once Coorslike unobtainium, with the occasional case provided for as a Christmas present or on a return trip from the Bahamas.  So many great memories with this formerly high horsepower beer, I still drink it as my Bahamian favorite. The Squirrel scarfed up some cigars and the next thing I knew we were loading the boat direct from the taxi.  Everyone hustles, it is a great team, and since we all know what to do things got stowed quickly.

We waited a while for a local friend to pick up some maps and charts that the Squirrel is currently developing. With the meeting over Dave fired up the starboard engine and then the port, but something was wrong, making a bit of noise so he shut her down.  We scanned the handbooks and Dave made some calls, resulting in a delay as we pulled the valve cover off the port engine and checked the injectors.  I really didn’t care if we didn’t leave right away and I enjoyed the opportunity to study the engines and help Dave with the wrenching.  We checked the electrical leads to the injectors, per telephone direction from the local mechanic, and sure enough that was the problem.  Disconnect and reconnect and once fired the port engine purred like a sleeping Tiger.  We were into the Tongue of the Ocean headed to the Middle Bight of Andros Island. 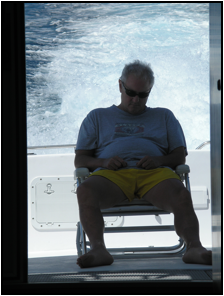 The Flying Squirrel passed out on the back deck, letting the worries of work and flying reside elsewhere, dreaming of G4’s.

We fished a little along the way, drank cold beers (some slept) and we finally anchored a ways up the Middle Bight. The Squirrel grilled steaks and Em  made a delicious salad. Everyone was finally chilling out and I finished a rather long day with my favorite scotch in a ceramic coffee cup and watched the stars.  I saw two satellites and a shooting star, making a wish on my daughter’s behalf, then retired to my bunk.  The wind came dashing through the forward hatch, and I slept like a baby… (to be continued)