On a clear breezy day, we had the opportunity to race and sail with twins.  Not twin sailors, but twin sailboats.  A friend of ours bought his first large sailboat which was a Bristol 29.9, an upgrade from his 26 foot Catalina.  David’s brother, Jon also had a Bristol 29.9 and all three sailors agreed to meet at Bunch Beach. 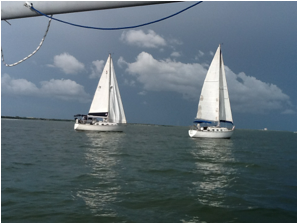 Here are the players:

There was Captain David Bickel, an old salt in his 28 Phillips Rhodes; Anhinga.  He raced for years in Tampa Bay.  They called him the Kat! With the rushing clang of the halyards against the running gear, the grinding spin in the lines of the winches, and with the sound of the luffing of the jib he knew the moves.   He was an expert from stealing the wind in a tacking war to counting the puffs to propel any boat further and faster.

And there was Jon Bickel, a seasoned single handed sea dog, brother of the competitive Bickel clan. He was sailing in his Bristol; High Voltage2.  This seaman would take off for weeks finding solitude of the Marquesas just to hear the quietness of nothing.  Comfortable on the water Jon would spend days in search of solitude anchoring in secluded mangroves, or the peaceful beauty of a silent island.

Lastly we have Mystery Mike in his Bristol; Black tip.  He was a low keyed seafarer with a passion for wooden boats, who still was unsure of his abilities in a larger sailboat; more used to taking picnic sails with his wife on the eastern coast; where the sailboats soar on mystical winds and the sound of seagulls is heard flapping off the bow through the mist of clammy dawn.

The agreement was to race from the Sanibel marker to the bridge and back.  The sailboats were all close-hauled heading into a breeze of 13 knots.  Straight away, David tacked Anhinga taking away High Voltage2’s wind and swung in front of Jon.  Mike was in last place.  Suddenly there was a velocity shift; Mike took a 90 degree turn swinging The Black Tip into first place.  The move took us all by surprise with a lot of woohooing coming from Mike’s boat.

Afterwards we anchored back at Bunch Beach, grilled burgers, and  watching the sun set over the light house on Sanibel Island.  What fun day around the bay of Fort Myers beach. 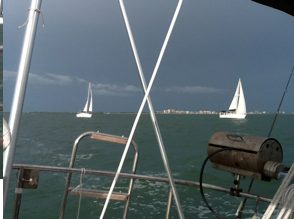