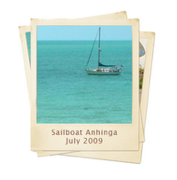 Every Mariner knows that a ship wants to be in the water.  This keeps a boat healthy.  It’s not just the maintenance one does before a trip, the stroke of sandpaper along her teak, the replacement of worn moving parts, or the re-stitching of a weak clue in the jib.  A happy boat needs to keep moving.

Likewise, every Seaman has heard the call of the sea, when the wind tumbles with untamed waves sending a breeze of a whisper saying, “Come out with me, and immerse yourself with me.”  It’s not just a call, but a drawing of one’s soul back to the primal source of life.

We almost lost our boat in the Bahamas.  David and I were finishing up a 3 week sail in our 28 foot Phillip Rhoades sailboat, Anhinga.  We anchored on the leeward side of a rocky island as a weak Northern front was coming through.  By 3 o’clock in the blackness of night our anchor alarm went off.  We were about to slip towards the mass of jagged rocks off the stern.  I was on a pitching bow holding onto two anchor lines like a bull rider; below David was trying to start our Yanmar diesel engine with failing starter wires.

David got the engine roaring and we gingerly maneuvered around the rocks to be sheltered from the wind.  That morning we woke up to what could be called a white squall.  It’s all I could see, it was glorious.  I could not keep the rain from pouncing through the bin boards of the companionway.  When the storm passed we were amazed to see a large water spout spinning alongside the leeward part of the island right where we had anchored that night.  Anhinga became our sanctuary.

The sun came out and the winds turned southwesterly, so we set off our way back to Bimini, at a running pace of 7 knots.  Quite fast for Anhinga!  We were having the ride of our life!  The 4 minute clip below is what I put together from the sail after the storm I call, “Anhinga’s song.”

We had watched a film about a young man named Charlie Cloud, who raced sailboats in high school.  He was showing his little brother the ropes; they stood together in the dawn watching the sailboats set off from an unnamed shore.  His little brother said to him, “Charlie where do you think they are going?”  Charlie whimsically looks across the bay and says, “Everywhere.”